Is your infant sleeping safely

Since 1994, the American Academy of Pediatrics has advocated that infants should sleep on their backs to prevent “crib death.” The campaign, called “Back To Sleep,” was undertaken in response to research published first in New Zealand, then Australia, England and many other countries, which showed that infants who sleep on their tummies had a statistically significant greater risk of crib death than infants who sleep on their backs. It has been speculated that the reason for this is that infants, who cannot roll over will sometimes breathe in their own exhaled carbon dioxide when they are sleeping on their faces. This causes a deeper sleep in which their muscle tone becomes so relaxed that they allow themselves to smother. 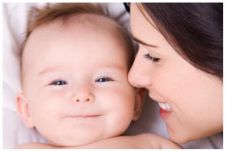 Since 1994, the percentage of babies who are placed prone (on their tummies) to sleep decreased by about 80 percent and the number of infant crib deaths decreased by more than 50 percent. It has become apparent that at least some of what was labeled as unexplained infant deaths were really accidents.

In addition to the position of sleep, the research also showed that the nature of the bedding and the environment in the crib had effects on the infant’s safety. In New Zealand, where babies sleep on sheepskin, the prone position was found to be particularly dangerous. All-natural bedding such as fur, straw and bean bags were also found to add to the risk. It was suggested from this research that infants should sleep on a firm surface covered by a flat well-fitted sheet, they should be dressed as warmly as needed and covered or swaddled only with loosely woven or thin cotton blankets. Overdressing was also found to be a risk factor. It was also recommended that no stuffed animals, soft plushy or quilted toys, bumpers or blankets be placed in the crib with an infant to avoid the risk of accidental asphyxiation. 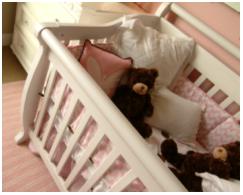 Materials like plush and quilting are not “breathable.” Try covering your nose and mouth with one of those plush “baby carriage” blankets. You will see what is meant by not “breathable.” Obviously, these recommendations also apply to baby strollers and carriages. It seems, however, that there is one type of sleep environment that was not taken into account when these studies were done.

In a study out of Scotland, published this month in the prestigious journal, Pediatrics, a number of unexplained infant deaths were reviewed and one additional inquiry was requested of the families. That is, “Was the infant sleeping with anyone at the time of death?” The results of the inquiry showed that a very high percentage of these unexplained deaths occurred in a bed or couch with an adult sleeping nearby. There were infants sleeping with nursing mothers, infants sleeping with siblings, and infants sleeping with grandparents. The risks were particularly high if there was any use of alcohol, drugs or any smoking in the environment. 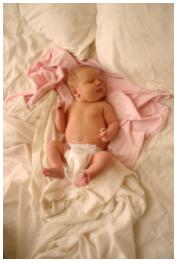 This is not so surprising if you think of what is in an adult bed beside the unconscious adult (all sleep is a form of unconsciousness). There are pillows, blankets, and quilts—all of the bedding we are so careful to avoid in the crib. Couches were particularly singled out in the study as dangerous for the baby when sleeping with an adult.

What does all of this mean? In the United States, where the crib death rate is pretty low, it means that anyone baby is probably not at great risk. If an infant simply cannot adjust to sleeping on its back, prone sleeping, in a proper crib environment is probably not going to cause any serious harm. As we know, many breastfeeding mothers are accustomed to sleeping with their infants.

How often do we hear of an infant’s death from this habit?

It happens. The community doesn’t always know about it. Many times parents are awakened by the thump and cry of an infant falling out of their bed. In my own practice, a 4-month-old baby had to be resuscitated after the mother awoke suddenly and found her baby blue and lifeless under her quilt. Another mother found her infant trapped by the neck dangling between the bed and the wall. That infant also survived. What do we expect from totally exhausted mothers who drift off to sleep with their nursing infants? All mothers of newborns are sleep deprived. It is not their fault when they lose their awareness of the baby as they sleep.

There really is no way around the danger. The infant must be put down in an infant seat, a bassinette, a crib, or even the floor before the adult falls asleep. Even if the risk is very small, it should not be assumed that any baby is safe in an adult bed. The statistics against co-sleeping with infants have been gathering over the last ten years. There is a danger in this habit. 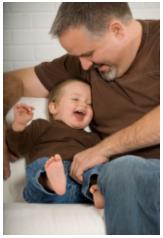 We must always do our best to ensure the health and safety of our babies. It is our end of the bargain we make with them. We agree to do everything for them. We have to feed them, burp them, change them, dress them, soothe them, hug them, kiss them, love them, tickle them and keep them safe.

What does the baby have to do to keep its end of the bargain?

The baby does not have to be good, or quiet, or pretty or easy to care for. It only has to be cute! They all seem to hold up their end of the bargain. So the rest is up to us.