There has been a huge effort made to try to eliminate “crib death”. Once it was realized that sleep position made a difference, the American Academy of Pediatrics began to advise parents to let their babies sleep on their backs or sides on firm mattresses with no quilts, pillows, soft toys or bumpers. This advice has greatly reduced the number of crib deaths all over the world.

Further studies have shown other factors that have statistical relevance. Back sleeping is safer than side sleeping. Sleeping in the same bed with the infant, especially on a couch was shown to increase the risk of this tragedy.

Recently, a large survey was published that included among the questions, “Did your baby ever use a pacifier?” When the researchers looked at the statistics they were shocked to find that the percentage of crib deaths in the babies that were pacifier users was nearly zero! Even in the ones who only sucked for a few minutes a day.

No one is sure why pacifiers protect from crib death, but The American Academy of Pediatrics immediately published an advisory statement to encourage people to give their infant pacifiers. Because there is a concern about nipple confusion they are now suggesting that pacifiers be given after breastfeeding is established. They say that even a few minutes of sucking a day seems to be worthwhile (if the baby refuses, it is not recommended to try to force him). 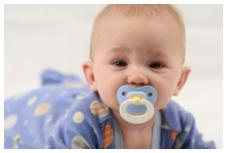 As for the problems that pacifiers cause, everyone knows that as the child gets older, pacifier time should be limited to “downtime”. Crib deaths are only a problem in infants, so stopping pacifier use as the baby gets older is a good idea. Speech problems, drooling, and dental problems can be avoided by eliminating the pacifier totally before four years of age.